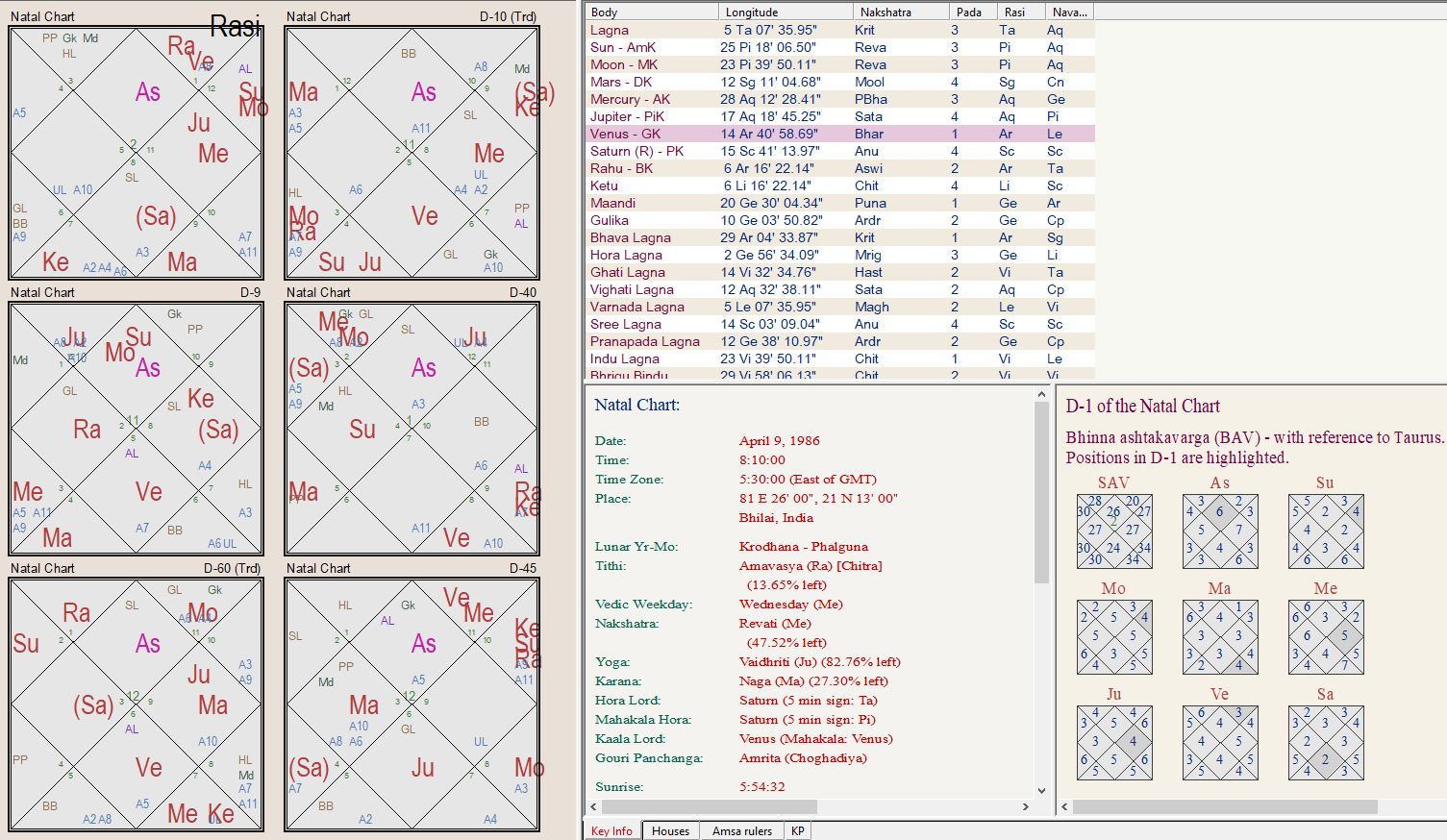 I was Binge watching RadheKrishna when this call came up as important and urgent.
Person is working in AIIMS neurology research. This consultation became as counselling and emotional as person on other end became very emotional which cant be expressed in words below.

Delayed in marriage, chain snatching and sexual molestation from Gym trainer after 4 years workout in GYM who she used to call brother, but saved by all.

1. These things happen around your Birthday. You must have faced similar in past too (Near Birthday Planets transit similar to chart and her chart shows Molestation. Ra+Ve in 12th house of bedroom + Ma in 8th house of sexuality. Mars is major reason behind it. Ra+Ve in Bharani shows her blind trust) Ans. Yes, Around every birthday I faced similar issues.
birth day ke din cousin brother did - bua ka beta -
2018 - Nephew -. didi ka beta kis wis, bed pe gira diya
masi ke chote bete ne kiya 2018 2nd number wali beti ka beta and husband also did 2004 (small kid)
Bhaiya - 2000
cousin - 2012
cousin masi ke ghar aisa hua
class 3-4 also while going to tuition.was taken to Terrance.
father's best friend elder brother when went to their house in 7-9 class in teenager and was touching
touji ke ladke ki shaadi main touch main
yaha shaadi ke aas pass
I got saved till now. Will some thing big happen in future related to it. I am very scared for it.

Lets see if your chart has afflictions and stories related to it.

3, You got Ovarian Cyst or related (Bharani Nakshatra Theme)
Ans. Yes, around 2014.

4. In anger you have beaten your legs and self inflicted by cuts in immense love for someone where you were in stage of attachment in love (Nimit - Radhe Krishna)(8th house Ra + Mars in sign of Sagittarius (Thighs) with 4th aspect to 11th house of legs area with Su+Mo+Ma - Emotional anger under ego. Lord is 12th to 11th house so helplessness, Kritika Nakshatra lord Sun bringing blade to picture)(D9 showing Ma+Su+Mo)
Ans. She started getting emotional again and said that I have beaten my legs and thighs multiple times and have self inflicted by blade by making deep cuts on my legs. which I did after a breakup in 2014. Till now some marks are still left.

5. You have two parts of personality one where you are very emotional for outside and not able to fight your enemies but you burst out anger inside.(4th house Cancer and 2nd house lord with Jupiter and 6th house ketu in libra will not allow her to fight)(Kal Sarpa yog)
Ans. Yes, I am not able to fight and then i get angry on myself

6. You don't go for interviews and stays longer in one job only (Ketu in 6th house in sign of libra)
Ans. Yes, for 6+ years working in one place only and have interview phobias

7. Your body shakes specially lower body when you have enmity with someone. (Ketu in 6th house in sign of libra)(Rahu aspect mercury in D9)
Ans. Yes, I get anxiety and shakes

9. Infections related to private parts should be there recently. (Ra+Ve - Bharani Nakshatra Theme)(Ketu in 6th house in sign of libra)(Vimshotri Dasha - Ve-Me-Sa and ketu coming up)
Ans. Recently got PID-Pelvic inflammatory disease even when not in relation with anyone for years.
Dispaperia happened in last from 08-02-2020.

11. Story relates, you have a pending karma to help a female in verge of dying to admit and serve in hospital in emergency and arrange donate her blood. You will not be able to reach her but try your best to reach and help. (Lagna Lord Venus(Female) with Rahu in 12th house of Hospital in sign of Aries with lord Mars (Blood) in 8th house (Emergency/sudden/Dying))
Ans. Prateek Ji, yeh agar ho gaya ho to already and she started crying again
Prateek - When did this happen and what happened
Ans - My best friend died that time. She was my study buddy and stayed with me for a month in February 2009. After a week I came to know friend died due to suicide due to blood loss. 2009-march 9, feb main saath rahi thi, saath main padte the
Prateek - So it happened between 2008-2011
Ans. Also I lost my child hood friend who stayed in an house which she said being very negative and she may die to which native paid no heed and asked to carry on. Later her friend died as well as friend's mother got ill in such a way that whole body filled up will water and multiple organs failed. All happened very quickly in short span of time.

12. I can see child abortion in chart. (Ketu in 6th house in sign of libra)(8th house Mars)(jupiter lord in 12th house and 12th house in 8th house)
Ans. Prateek Ji, I didn't tell you before as I was hesitant about what you will think. I got conceived in 2014 after 4 years of relation and my Boyfriend didn't support me so I had to get child aborted.

15. You will be good in finding hidden treasures. (Lagna lord in 12th house(intuition) with rahu, Moon and Sun in Pieces and Mars in 8th house and its lord in 10th house with connection to 11th house of income)
Ans. Yes Right by Intuition. I went to bua ji house once and I said to her that there is hidden pot under the house where cousin brother is sitting. To which mausi replied that how do you know and that's right there is hidden pot being ancestral house its kept there.

16. But because of all above incidence specially all molestation you talked about you will not be able to trust guys and considering yourself as an object will start self hatred. This is reason behind your delayed marriage and diseases cropping up in lower abdomen and private areas. (Theme of chart is pointing to it)
Ans. I am able to overcome such incidences quick but not able to trust guys due to this only and worried about my future related to this only.

Below discussions on random days
17. Do you have an habbit of showing/writing your name everywhere?
Ans yes.... exactly, in my body ..... in my bedsheet.....in wall every where. how come...

18. are your signatures long with full name ?
Ans.earlier I used to do...my initial wid surname... and now wid name only...