Below are 7 case studies of Kids paying of Karmas of their Parents / Ancestors.
Explanation related to Case 3 may cause confusion so no explanation for now and would request you to go deep when you feel ready.

Native is a prominent personality in Prime Ministers Office and have asked to keep his Birth Details as secret. Thus sharing Astro chart image without birth details for learning only with no more discussions.

Background
Native's wife has left him and his Kid has Dyslexia. 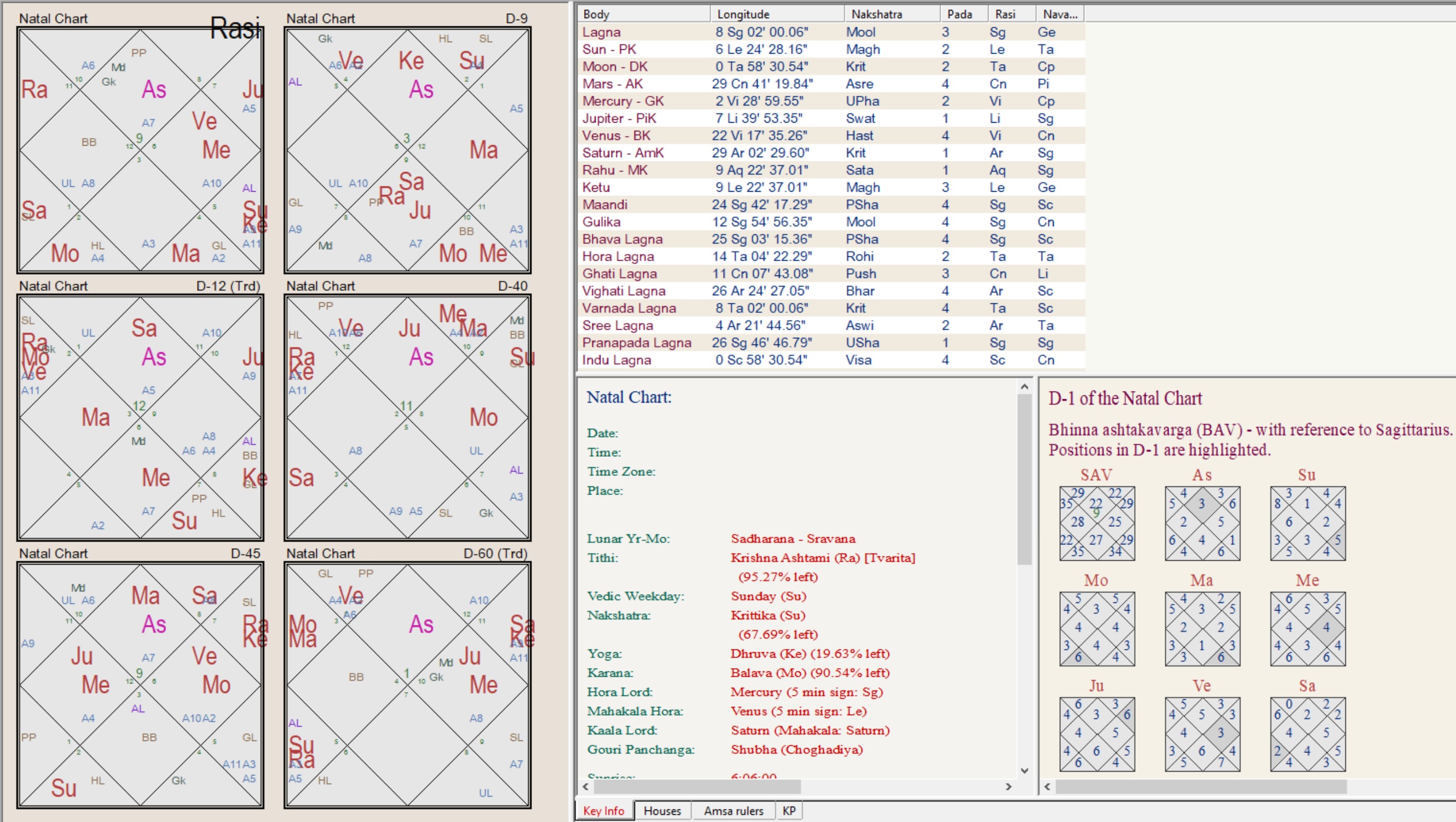 Following was predicted & confirmed
1. Enmity with Wife and In-Laws
2. Issues started after giving away property
3. Must have kept long hair in some time of life
4. Wife wears high heels. Will come for sure to meet once in high heels only
5. Lot of small properties are in name of Workers & Father
6. Have Good Height
7. Pending Karma - Dyslexia Kid and Wife went away because for giving job you sexually exploited a girl.
kisi ladki ko job dene ke bahane se sexually exploit kar diya
(Make 10th house as Lagna in Rashi Chart and you will understand the Story)


Case 2 - Kid into relationships and no studies 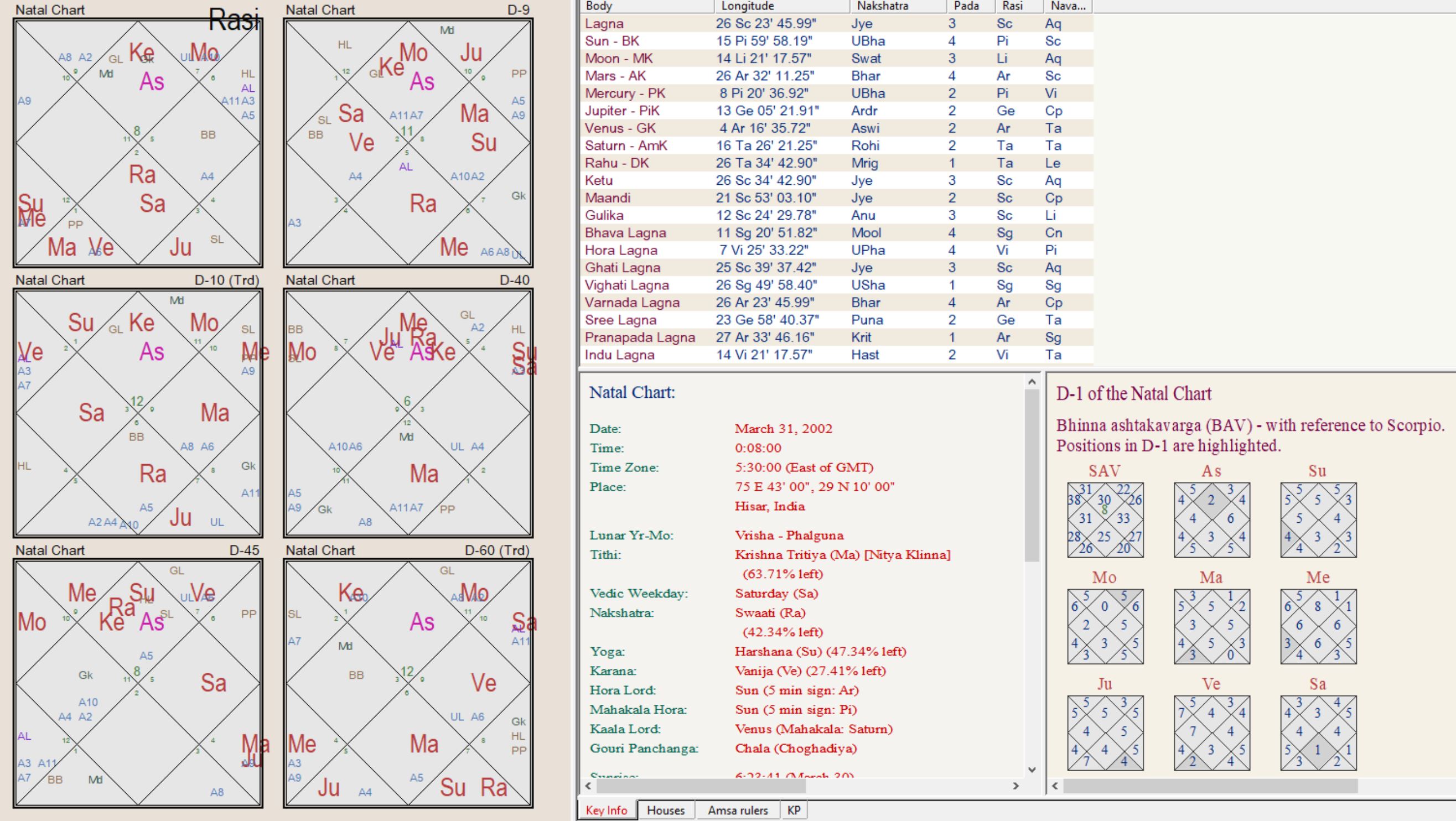 1. Nani got widowed very soon
2. Nani was very Bold Dahakad Jat
3. Girl mind into relationship which started the issue and her interest went off from studies
Pending Karma
Education will suffer because Mom have cheated someone in workplace where she got someone else out of job. 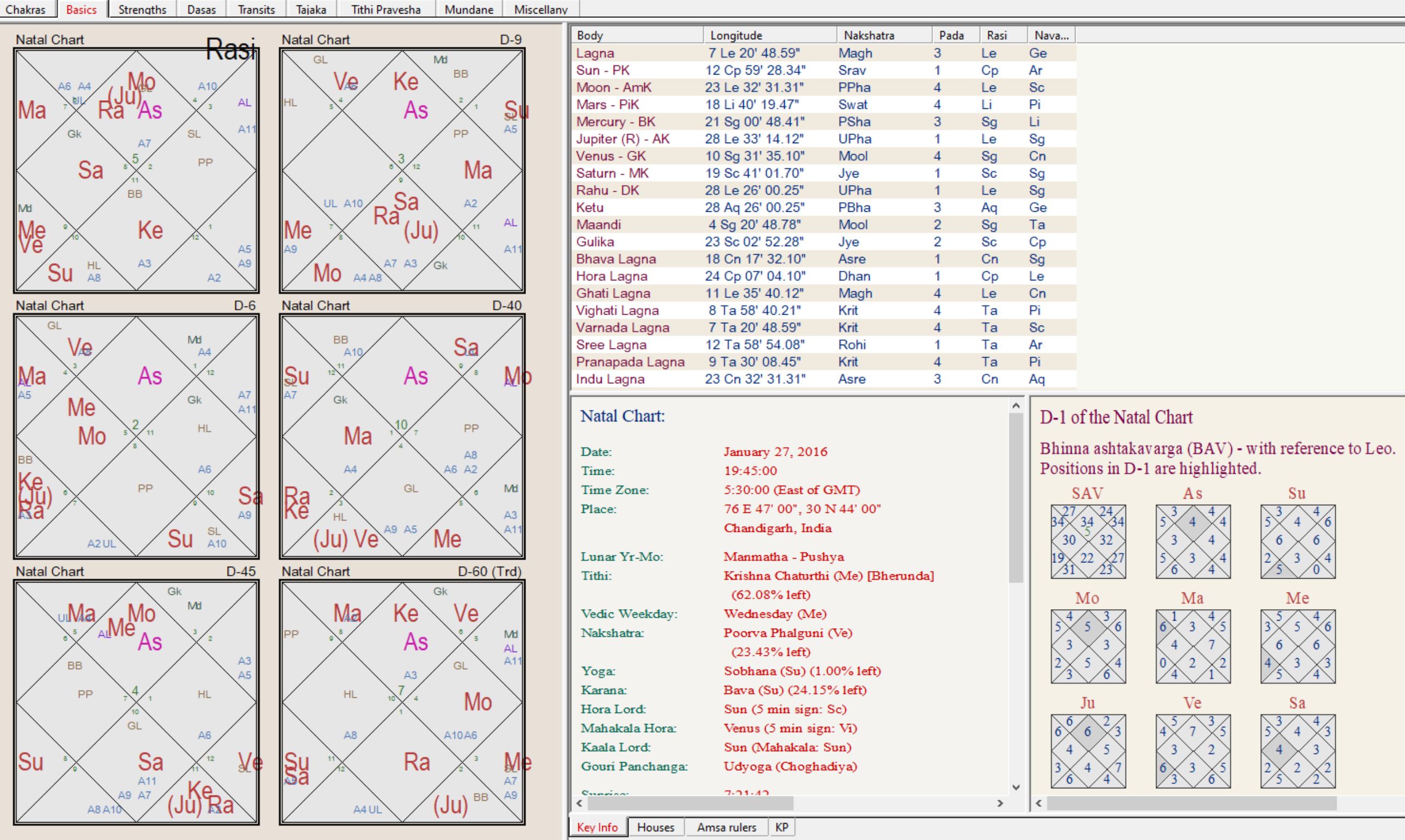 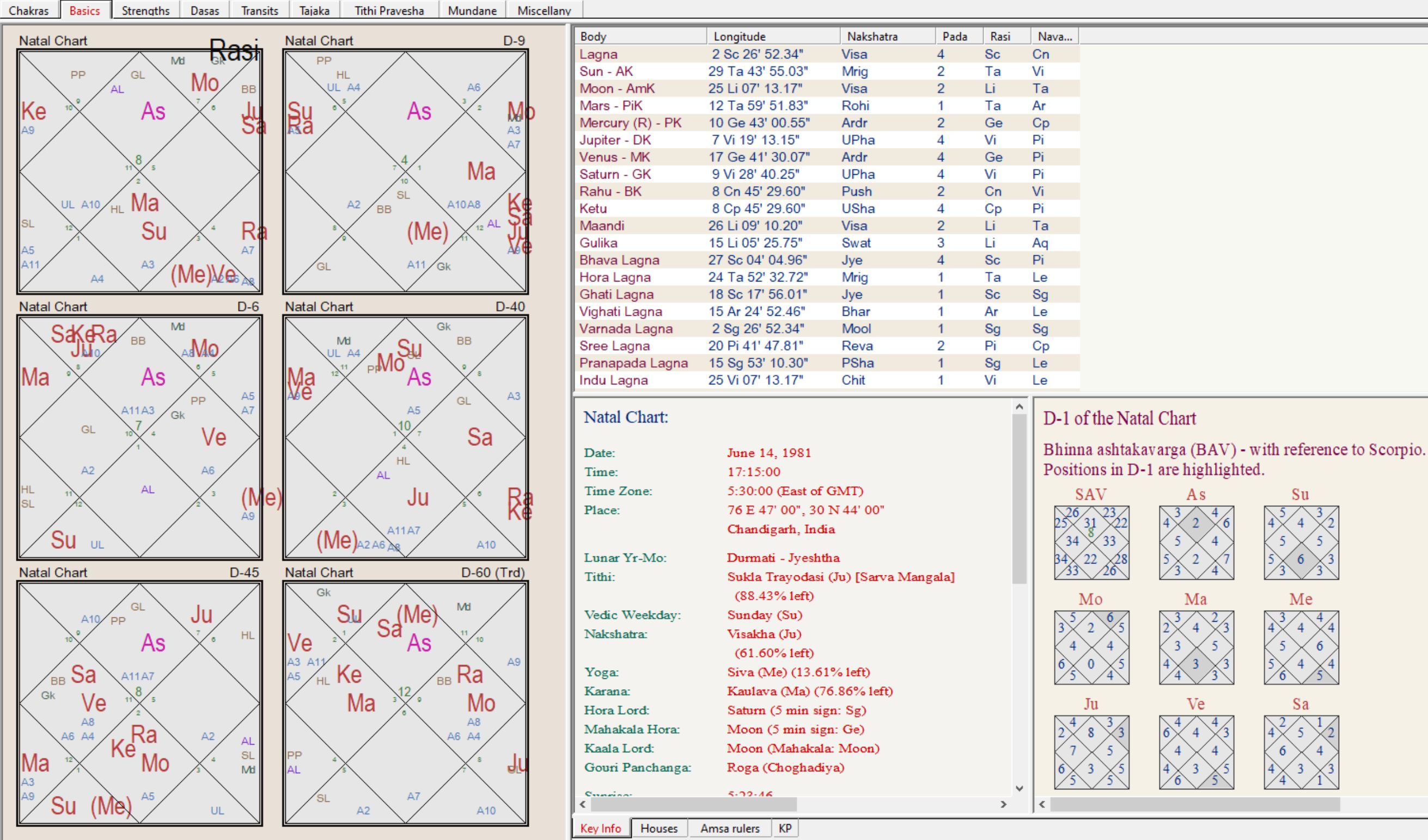 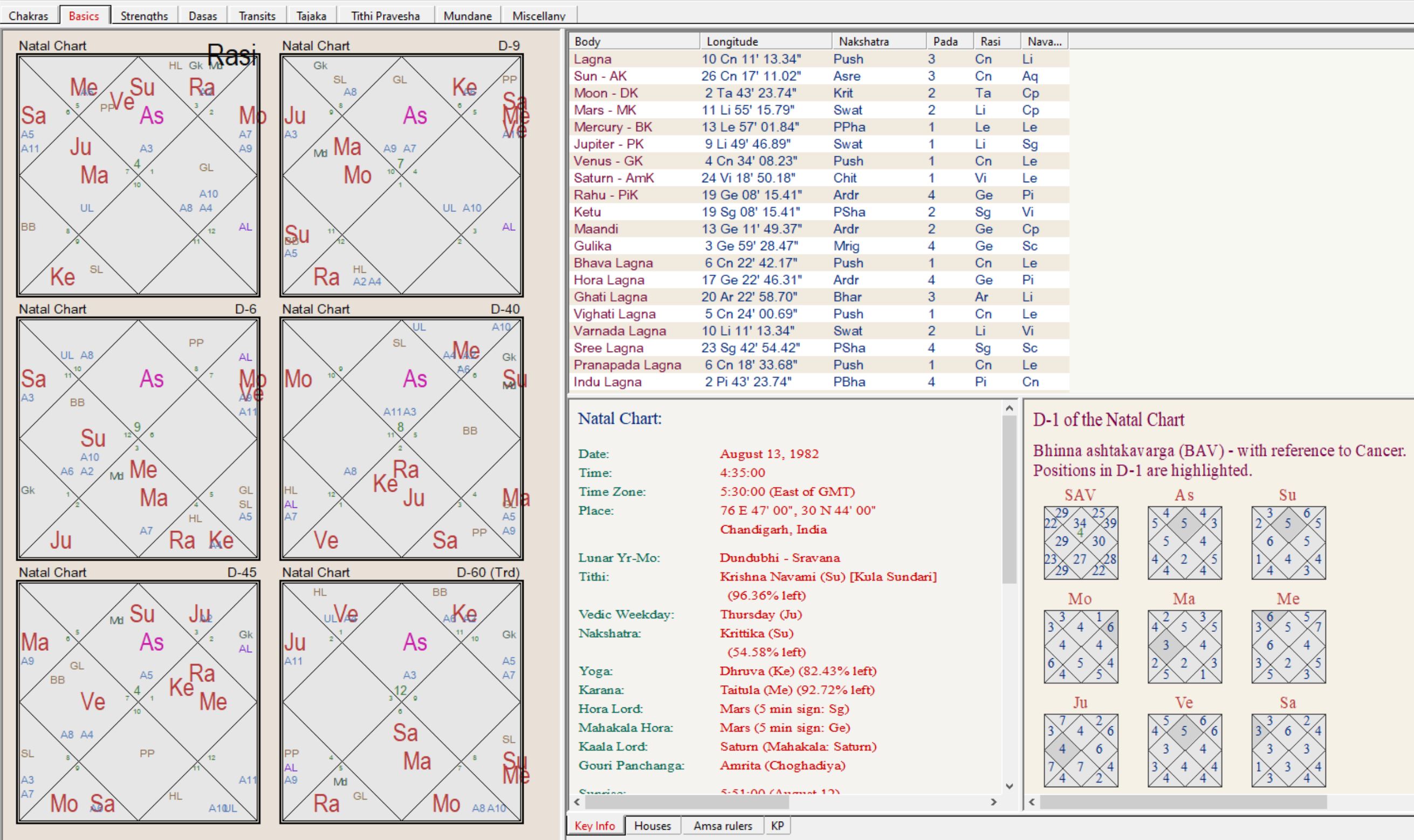 Case 4 - Kid with Type 1 Juvenile Diabetes - I am still on this Case
I am still Studying this Case, Just had a look till now and Consultation is still pending. Will update further post Study/Consultation.

This chart was given by Mother of Native for Health and Education.

My Mind Map Pointers before consultation - Will update it with predictions post consultation
1. Krittika pada 4 showing up
2. Laxmi related name - traditional naam
3. Brother will have issue
4. 5th month pregnancy issue
In process of pulling out pending karma with Nakshatra when will get time. 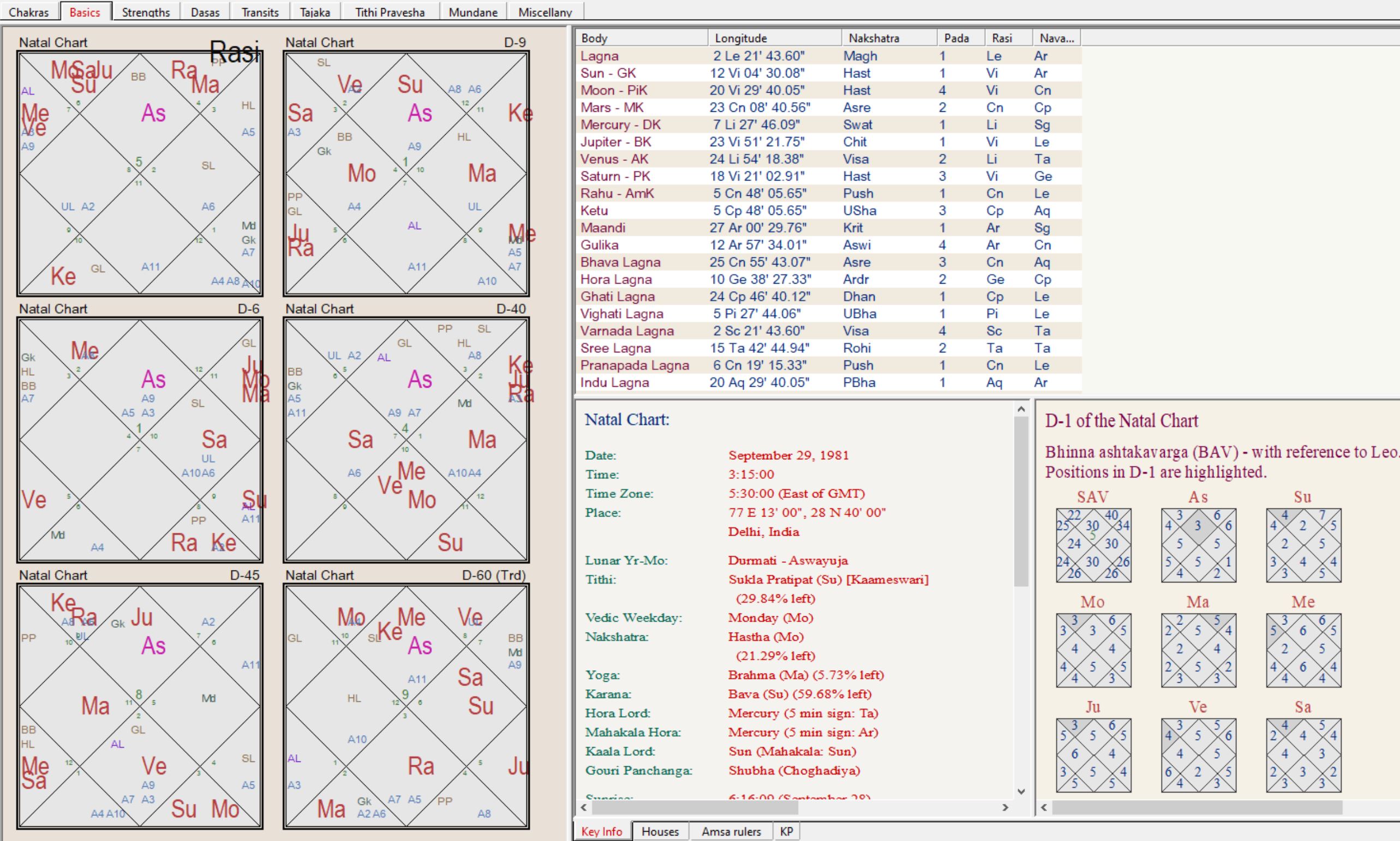 My Mind Map Pointers before consultation - Will update it with predictions post consultation
1. Lords of all Dushthana houses in 2nd house in sign of Virgo showing pending karma related to it including kids house.
2. Father has heart blockage/issues and got to be operated.
3. Navamsha confirming Kids issue.
In process of pulling out pending karma of mother with Nakshatra. 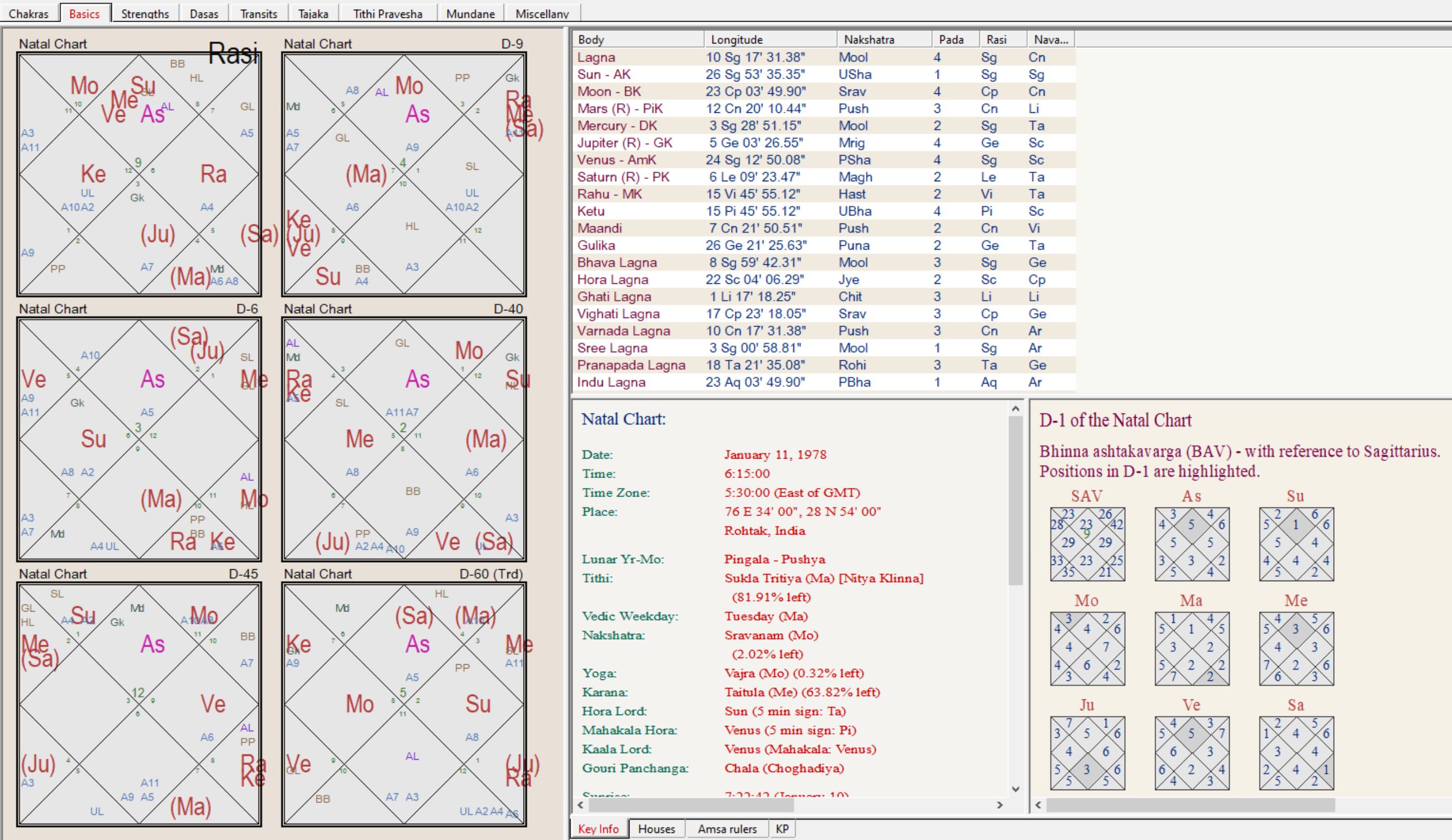 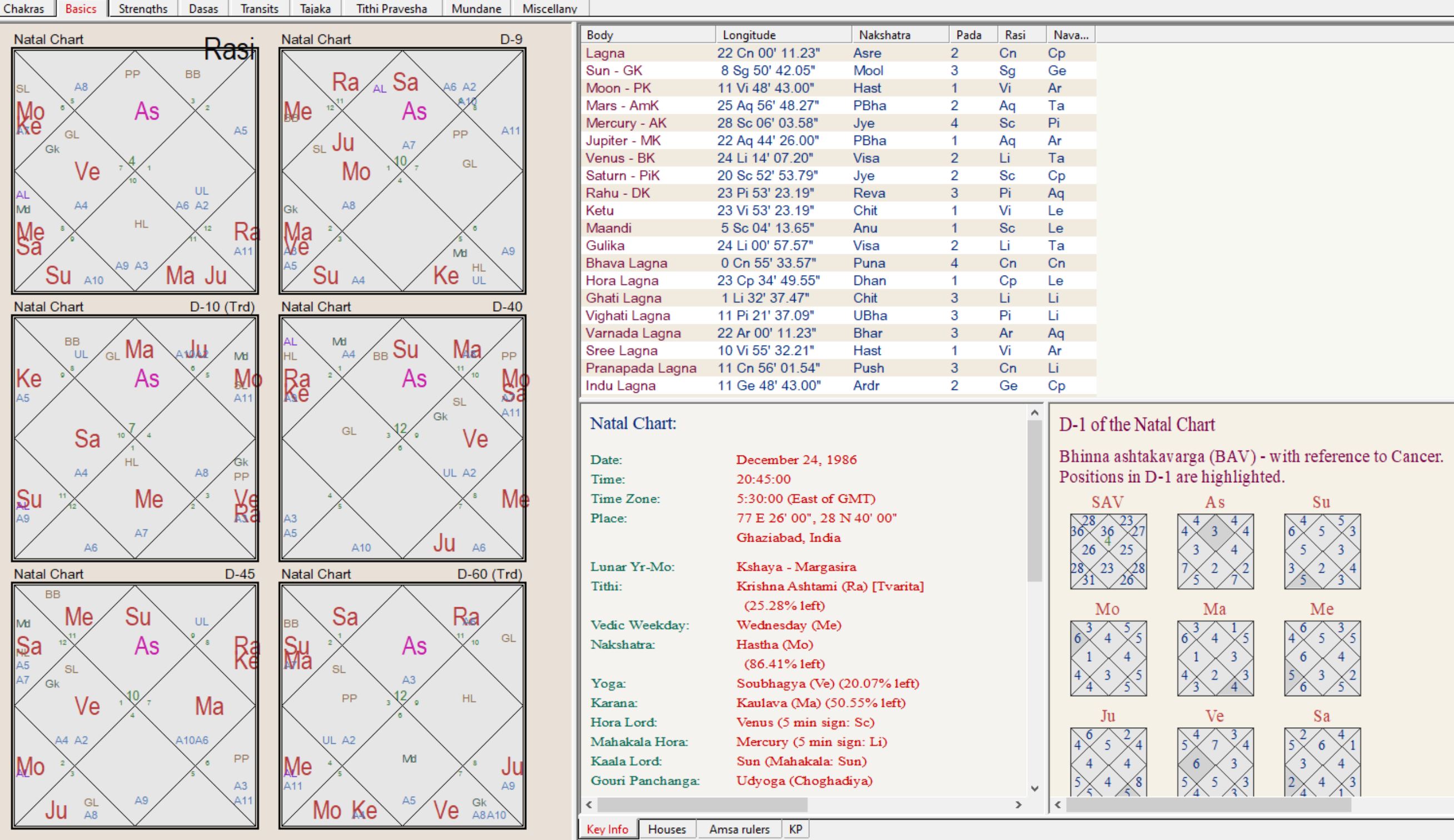 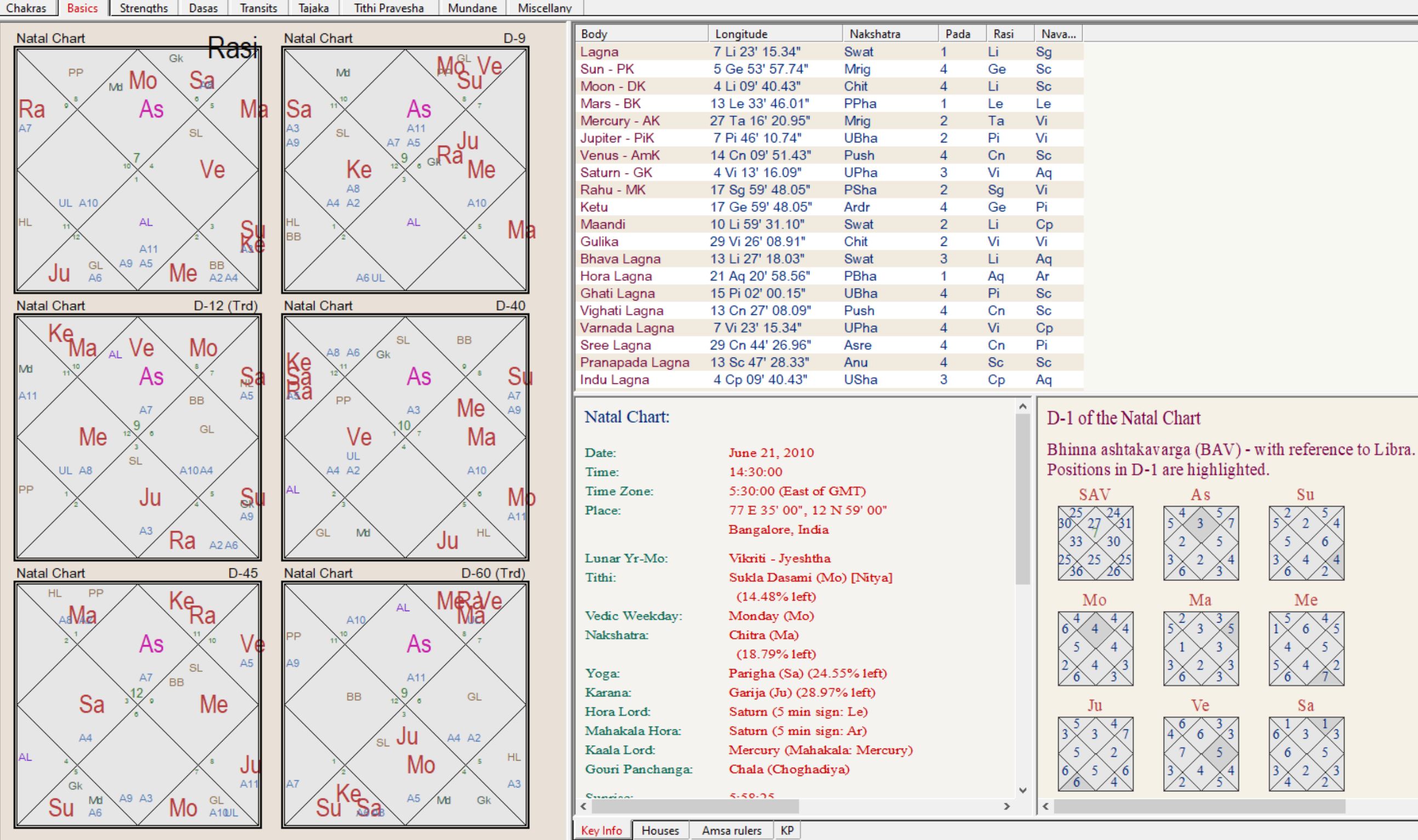 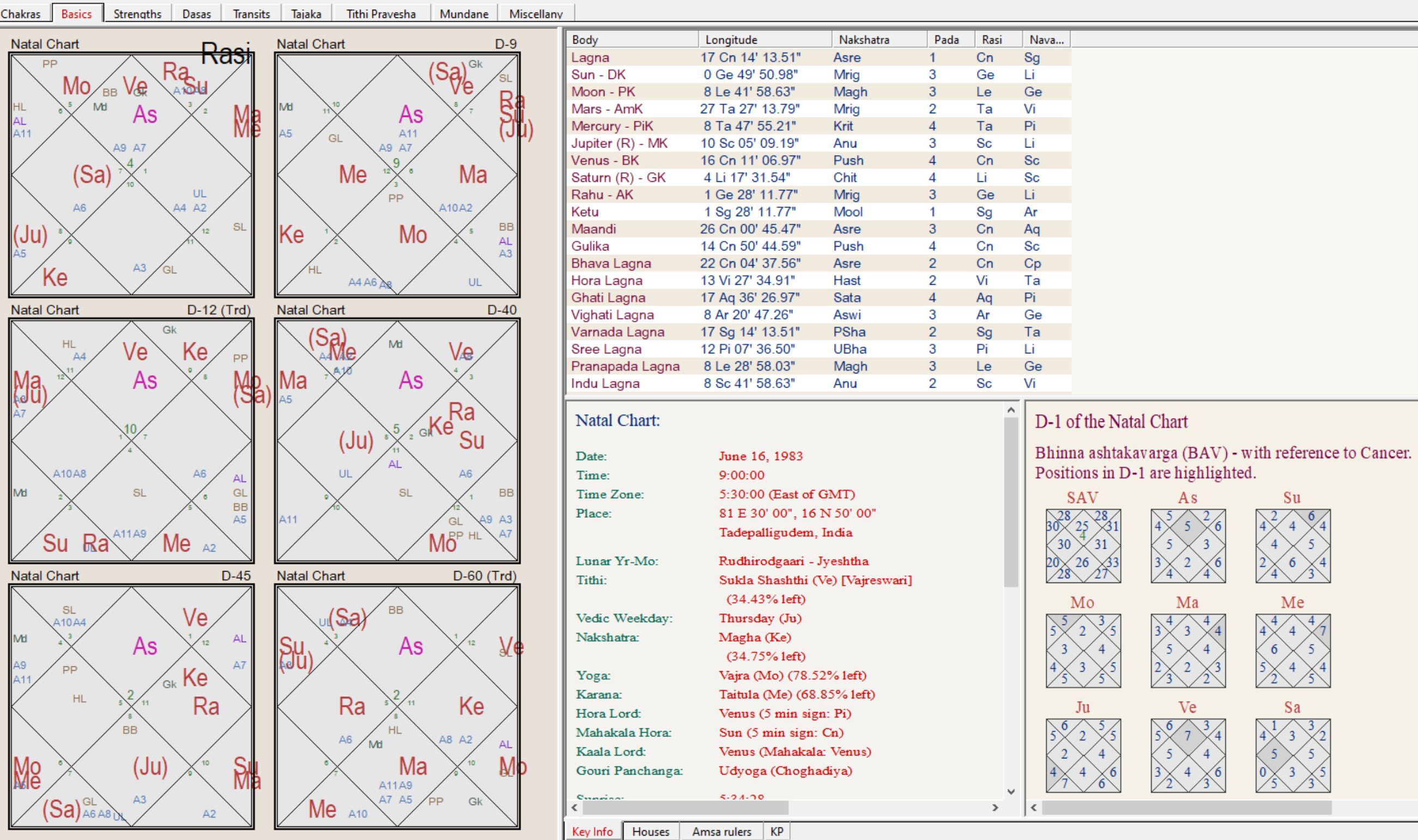 This person is highly social. Wanted to be a doctor but now in IT field. From past one year his life is going Topsy Turvy. With no kids even after 11 years of marriage, Divorce being filled last year by Wife and now suffering from cancer which got detected in last month. Due to delayed diagnostics the cancer tumor in lower spine got enlarged in such a way that it effected pressure on spinal nerves causing Paralysis to Pancreas, Kidney, Urethra and both legs. He is left handicapped on bed with in-capability to move legs or even excrete out from body without machines.
Following predictions were told to him for time being.

1. Your father has killed lot of snakes
Ans. Yes

2. For the kids issue there is a story where a kid died in father's work place and sweet food is involved in it.
Ans. Yes, My father was once taking away lot of Sugar Cane via road and like kids run after it. A kid tried to catch it up while my father was driving and he died by coming under vehicle.

4. You have government paper related issues when travelling abroad.
Ans. When I travelled abroad on official purposes, company handling my passport made some mistake of intentionally used a fake visa and on my complaint even tried to cover their tracks by tearing off my passport page. I was under lot of stress and some how all got resolved.